Margaux Renee Grossman never complained, even as she faced the most painful stages of her battle with Ewing’s Sarcoma, a rare bone cancer that took her life in 2001 at the age of 15.

Her courage, positive attitude and kindness left a lasting impression on her friends, who formed “Margaux’s Miracle Foundation” one month after her death. The foundation has grown and endows a clinical research fellow annually at Memorial Sloan Kettering Hospital in New York City, one of the world’s most foremost cancer centers. The research is specifically intended to find cures for rare childhood cancers.

Stuart Grossman, Margaux’s father, was kind enough to write about his daughter’s experience at Temple Judea and why he thinks The Margaux School is a special place for any child to start their academic journey. The complete letter can be found below. 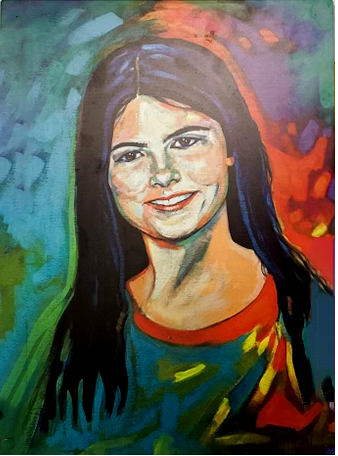 Margaux Renee Grossman auspiciously joined the world during halftime of Super Bowl XX. That game featured the nearly undefeated Chicago Bears (whose only loss was to the Dolphins), who crushed the New England Patriots 46-10.

I should have known then she was a child of destiny.

But as if that drama wasn’t enough, two days later, as we prepared to take her home from the hospital, the TV in our room showed the Space Shuttle Challenger blowing up in a stunning tragedy.

Life then was pretty uncomplicated. Margaux was our firstborn, so every developmental experience that she reached was celebrated as a milestone. And then, as if it was just overnight, she was suddenly ready for pre-school.

Like many other families, we made the rounds trying to determine the best fit. We concluded it was Temple Judea. We loved the mixture of Anglo, Hispanic, Jewish and non-Jewish students, and we felt that mixture was reflective of life in the real world.

Almost immediately, as she bonded with her little buddies, we became great friends with a number of their parents. To this day many of those friendships endure, and I frankly love running into those families as I meander through South Miami and Coral Gables. There really is a powerful bond that unites parents of Temple Judea students.

The preschool years were especially valuable to Margaux. She understood that life was now about getting up and going to school (obligations), that while there she had to conform to the rules (behavior), and that her fellow students were all so different and at times would seem fun and at times seem terrible (socialization).

She learned about the Jewish holidays and values, but at the same time she was made aware that the world certainly was not all Jewish and celebrated all major holidays and birthdays with great relish. This bonding and cross-cultural experience served her well as she later went to a school in Delray Beach that was located on the grounds of The Unity Church. By then she was proud to be Jewish, her identity was in place and she had the courage to be herself.

I will always be grateful to Temple Judea for giving her that foundation. She learned to love learning there as well, and that made school an enjoyable experience throughout the rest of her life. She possessed great skill in making and keeping friends, kept positive thoughts and had a very robust imagination. The friendships she developed there also endured, and when she was ill and in treatment in New York, she was visited by her old Temple Judea friends. That made a huge difference to all of us.

Based on how well she did in elementary school and the fact that was accepted and started at Saint Andrew’s School in Boca (which is notoriously selective), I have to conclude that the foundation she developed at Temple Judea was powerful and enduring.

I want to tell you, as Margaux School parents or prospective parents, that your early childhood education objectives will not be misplaced by entrusting your child or children to the Margaux School. The faculty, administration and the Rabbinate are pledged to keep its accreditations at the highest level so that your investment should pay huge dividends.

Margaux’s spirit lives on now at the school that bears her name. In that way, perhaps, you and your children will come to know her. It is my sincere hope and prayer that your children and family reap the same overwhelmingly positive benefits that Margaux and the Grossman family did from her early education at Temple Judea.